The North Route is our Nº 1 route of the Red Sea. It is considered the best route to discover Red Sea diving. It is a complete and simple route for diving, matching all diving levels, although we recommend advanced open water level or equivalent. The sailing on this route is very short and pleasant, reaching the furthest dive sites in about two hours. The wide range of dive sites will give you the opportunity of diving amazing reefs like those found in Ras Mohammed National Park and the Strait of Tiran, visiting a living WWII museum at the wreck of SS Thistlegorm, explore spectacular wrecks like the Dunraven and the Kingston and enjoy all the underwater wonders of the Red Sea reefs in pristine dive sites like Small Crack and Shag Rock and the possibility of snorkeling with dolphins.
On this route, we offer 7 nights of a liveaboard, with 5 full days of diving. The last day is to desaturate nitrogen and do a bit of shopping in Sharm el Sheikh. 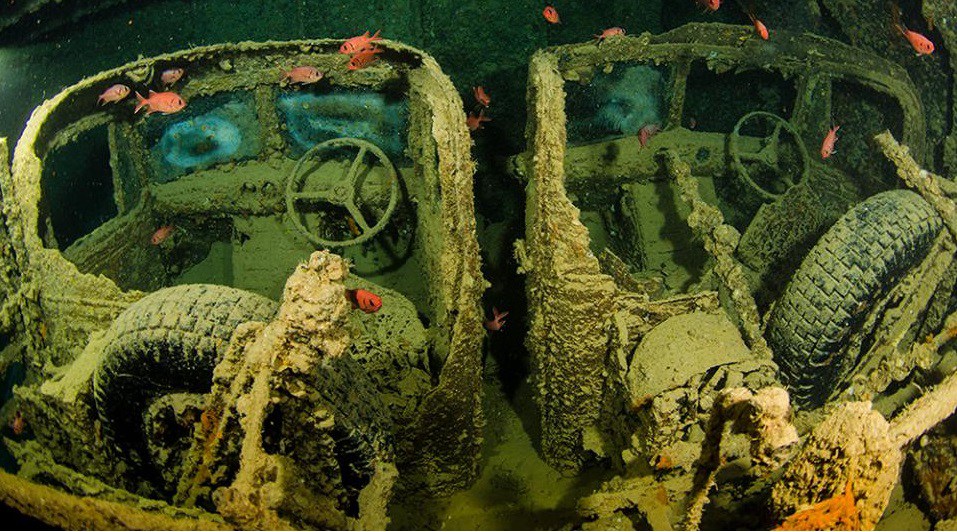 Day 1 (Saturday) SHARM EL SHEIKH
Meet & Assistance at the airport in Sharm El Sheikh by our staff at the airport. Transfer to the boat. Welcome cocktail, boat and crew introduction. Cabins distribution. Dinner on board.

Day 2 to 6 (Sunday to Thursday) LIVEABOARD DIVING CRUISE “NORTH ROUTE” Liveaboard diving cruise on full board basis (including water) and 5 days diving, up to 4 dives per day. Some of the highlights of the route are the Straits of Tiran, National Park of Ras Mohamed and wrecks like Thistlegorm, Ulysses, Dunraven, Kingston and more.

Day 8 (Saturday) SHARM EL SHEIKH
Disembark at early morning. Transfer to the airport. Check in assisted by our staff at the airport. 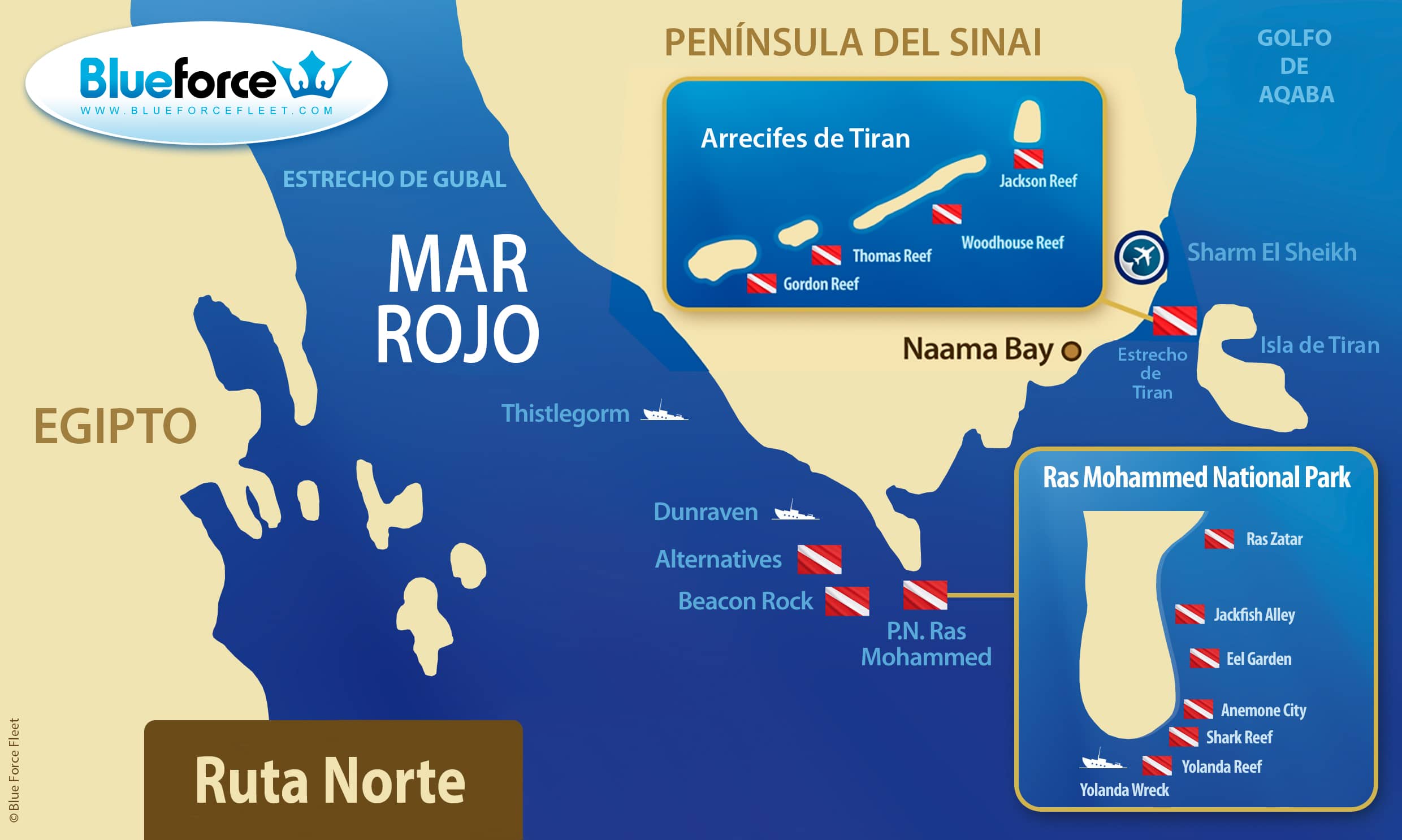 The most famous dive in Red Sea and considered one of the best sites in the world. We start off at Anemone city, where dozens of huge anemones (Magnificent heteractis) hosting a multitude of clownfish and damsels are to be found. From here we leap into the blue, crossing over the depths below, to the walls of shark reef.

Along the way possible sightings include; sharks, tuna, red snapper and other large pelagic marine animals. From there, the dive continues on to shallower water between the two reefs. Here, you’ll be able to see parts of the freighter ship: Yolanda, which struck the reef and gave it its name. Among the debris, you’ll find a large collection of toilets and the remains of the captain’s BMW. The area around the wreck often houses lionfish, blue-spotted stingrays and moray eels. The entire stretch between the two reefs is strewn with rocks overgrown with coral, as well as lots of coral on the sides of the reef, which contrast nicely with the white, sandy bottom. The shallow water, the light reflecting off from the bottom and colorful reefs make this a photographer’s paradise.

The traditional dive starts off with a cave at 5 meters which is actually a swim through coming out at a depth of 9 meters. The cave is covered with small gorgonian fans and a crack on the roof allows the rays of sun through. From here we swim on to a long Sandy Alley that gives the name to this site; it was originally named Fisherman’s Bank, due to the large amount of jack fish found here. You can see barracuda, tuna and all the usual Red Sea residents here. The dive finishes at the end of the sandy alley where most people are on 50 bar.

Ras Ghozlani is a beautiful dive site with lots of interesting things to see and discover. You start off on a sandy slope at a depth of around 6 meters which slowly descends to the drop-off found at around 25 meters. Tons of pinnacles in different shapes and sizes distract us with their fauna and coral during the whole dive. The pinnacles are covered with Table corals, big Gorgonian fans and healthy soft corals in many different colors. The pinnacles are teeming Anthias and other colorful reef fish. Another part of dive site, houses a small anemone city of Magnificent hecteractis anemones.

The worlds most famous wreck, it is located in Shaab Ali, about 30 miles from Sharm El Sheikh.
It was sunk by German aircrafts in October of 1941 and later discovered by Jacques Cousteau. It offers some of the most spectacular dives in the world, with its sunken cargo of trucks, cars, motorcycles, locomotives, weapons, ammunitions, wagons, aircraft wings, boots…. Normally a minimum of two dives are made on the wreck, one outside, visiting the propeller, anti-aircraft gun and locomotives and another one going through all its decks and holds. It is highly recommended to use Nitrox on this dive. If possible, we can make a spectacular night dive on the wreck, and perhaps even get to see the skiddish lantern fish!

Also known as Sara H. On the 22nd of February 1881, she hit against the reef at full steam, transporting her cargo of coal. This dive is very simple, being that only the stern of this ship remains intact. Yet the amazing table corals and amount of surgeon fish that reside on her, make it an amazing dive.

One of the best reef dives of the area. The entrance to a quiet lagoon, we leave the boat inside the protective reef and journey out thru this slim passage way on the rib, using the tidal current to push us back to our vessel at the end of the dive. The corridor is quite shallow but it´s like diving thru a small aquarium. Hundreds of acroporas (Table corals) grape corals, soft corals, stag corals and sponges, line the passage. In the corridor there are permanent residents like an enormous Hatchet fish family, different sorts of yellow tail barracudas and a big variety of reef fish.

A circular reef where there is a large sandy plateau and remains of a shipwreck.
The wreck of the Lullia, lays right atop the reef (since 1983) making her a superb landmark.
Very suitable for check dives on the South Plateau and also some super nice drift dives along the east and west walls. Night dives are spectacular although we can only sleep here when the weather permits.

Thomas is the smallest of the four reefs of Tiran, and if conditions are calm, it is possible to circle around the entire reef. There are no moorings on Thomas reef so all dives are made as drift dives.

On the South Plateau we find the Thomas Canyon, an amazing dive for technical divers, a rift starts at 35 meters and goes down to 96. The walls of Thomas reef are completely covered with soft corals and a lot of Gorgonian Fan Corals and trees of black coral. In the blue there is always the possibility of finding large pelagic fish cruising by and even hammerhead sharks are sometimes seen.

It is the longest reef of Tiran. Long and narrow, ideal for easy drift dives. It is an almost vertical wall which plummets into the deep. It also has an underwater canyon and a couple of caves suitable only for Technical divers. In the canyon area, we can see one of the few red anemones in the area.

It is considered the best reef in the area due to the quality of the corals, abundance of wildlife and encounters with pelagic life. It is a round reef with vertical walls and a shallow coral garden on the west side. Continually swept by strong currents, sometimes extremely strong, it´s great for wild drift dives, large fish life encounters and beautiful coral sightings.
During the summer months, small groups of hammerhead sharks (Sphyrna lewini) reside in the northern area.
Also on the North side we find remains of the Lara wreck, a cargo ship grounded on Jackson Reef in 1983.

FIND AND BOOK YOUR CRUISE